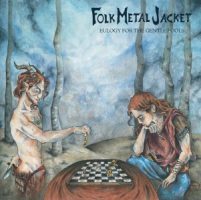 Combining folk metal with banjo is a really original idea and I used to complain about having no such album on the folk metal scene. There are, however, some certain attempts to it such as Finntroll’s “Skogsdotter” and Ensiferum’s “Stone Cold Metal” but are they enough to satisfy a greedy folk metaller’s hunger? Not really. Hence, when I noticed that Folk Metal Jacket was going to tackle this ongoing problem and come up with a material that a lot of people, including me, were in need of, it made me exceedingly happy and excited.
The intense use of banjo disappointed me heavily even though I had thought that banjo would absolutely add to it and could be in no way disappointing. Well, this album made it crystal clear that banjo might drown out the guitars and come to be intrusive in some cases. Even though this band has originality in abundance, this annoying use of banjo takes a lot away. And the other thing that I didn’t like at all is the shiny keyboard parts I had grown tired of, which can be heard in “The Forest” at the three and a half minute mark. This kind of keyboard parts make the music too complex and difficult to digest. And also they don’t simply connect to the rest of the song which is undesirable.
The mixing is pretty low-quality since keyboards and banjo drown out the music nearly everytime. If Folk Metal Jacket realize their potential and stop using absurd melodies with intrusive banjo parts, I’m sure that, soon we’ll witness wonderful albums to come.