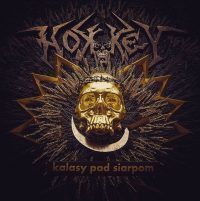 Hok-key is a melodic metal/folk band from Minsk, Belarus. The album,” Kalasy pad siarpom “is the second in a duology that began with Znak Biady in 2014. The album is dedicated to telling the stories that reveal the rich cultural heritage and soul of Belarus. The album is sung entirely in native Belarusian and that is its best quality. It stays true to the vision of the band and It’s also quite beautiful and moving. Sometimes it takes the edge off of the stories for anyone that does not speak Belarusian, however I applaud the decision to stay true to themselves and there is even a song,(“Spacatku bylo slova”), dedicated to preserving the native Belarusian language. The album is a big leap forward from Znak Biady in both musicianship and production. It features many guest appearances, most notably Vladimir Idorath on pipes and didgeridoo and Alena Protsko on vocals. The mix of male and female vocals on songs like,” Kali sumiac dazdzy” ,and” Calaviek padvojnaj zorki” are really great and a highlight of the album. The guitar leads are majestic and convincing. The drumming on this album is exceptional. Oleg Kansovs tribal rhythms and tempos set the stage for everything else and the sound mix really gets it right. Irina Sapunova’s violin is also a highlight in every song adding a mournful yet uplifting voice to each story. There is a lot to like on this album and after repeated listens I still enjoy almost everything. The lead male vocals, while mostly well done, are irritating in some spots. The language is beautiful and Dmitry Rudovichs voice is well suited for the subject matter. There are a few spoken word passages scattered throughout the album and they are all very well done. The most annoying thing for me is the weird electronic noises that begin five out of nine of the songs. The first time I listened to the album I found them just a little bit strange but after a few trips through they became irritating to me. I know the band incorporates electronic music into its overall sound and it mostly works. I am sure some people may not be bothered by the beeps and blips at the beginning of these songs, and the songs themselves are very good, but for me it breaks up the flow and seems out of place. Overall the album is a solid melodic folk metal experience and I really enjoy it.
While I wish that I could understand the lyrics the fact that it is sung in Belarusian does not distract from the quality of the songs. It is an uplifting and interesting record and I will look forward to this band in the future.