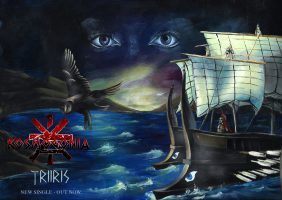 Greece doesn’t only produce black metal giants like Rotting Christ. Kosmogonia started life as a melodic death thrash metal band. Nowadays, after a few line-up changes they play folk pagan metal. Next year we may expect their debut album. Meanwhile the 4 men and two women release their first single.
With the song’s length at nearly ten minutes the band shows confidence. You wouldn’t release a first song like that if you think you suck. So, quite a bold thing to do. And, you know what, it ain’t half bad. Good sound, though maybe a bit too smooth around the edges for some. All instruments play their part, including keyboard and flutes, which are rather traditionally played by the girls. One of the first noticeable aspects of the band is that plenty of clean singing is used. And not bad either. Actually the clean singing immediately reminds me of Volbeat. The growls aren’t bad, so vocalist Kostas earns the band a couple of points. The overall sounds is more folk than pagan, I would say. Easy listening melodies, light footed flute, not overly fast, the rhythm section isn’t in your face. A good way to show the world what the band is capable of.
One point of criticism would be the length of the song. Especially the last couple of minutes, the tension seeps out of it a bit. No more aggressive parts, only clean singing. In the end, the song would be better if it would last for maybe six minutes. Sometimes less truly is more. Can’t wait to hear more, though.