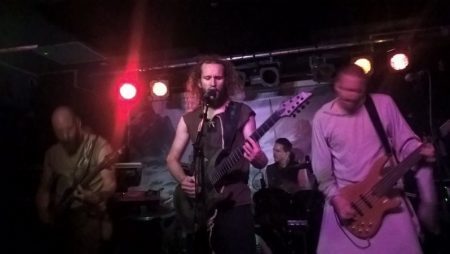 As the band explained earlier, Morgarten is the name of a historical battle in Switzerland. It’s also a folk metal band from that country. Exactly a year after having seen the band in Zwolle, Morgarten is back in Holland. This time in the pub stage of WIllemeen in Arnhem, well known for its many metal concerts throughout the year. To kick of the season Morgarten is joined by Nightland and Misanthropia. A nice mix of styles.
Morgarten being clearly the most folk oriented metal band of the night. The band has been around for over a decade, yet have only released one album so far. No wonder that most of the songs are off that album. A very typical folk metal band from the land of Eluveitie. Lyrics about fighting battles, dressed in proper rabbit skins, the band sure looks the part. The sound is good, the band is clearly enjoying themselves. Singer Pierric could be the brother of Chris Bowes of Alestorm. His rough vocals are the perfect addition to the folky feel of the band. Being the first band to play, Morgarten delivers a decent set to an small, but enthusiastic crowd. I wouldn’t mind if they are back in another year.
Nightland from Italy are quite a different story. Clearly influenced by Fleshgod Apocalypse, or is it the other way around? No expenses are spared to dress up as a professional metal band. It surprises me that the band, as is Morgarten, is back already after playing in another small venue in Arnhem last year. But that’s fine by me. Lots of bombastic death metal meets classic orchestrations. It’s all the rage and rightly so. Very nice gig.
Headliner is Dutch symphonic black metal band Misanthropia. Unfortunately without keyboard player this time. The remaining four band member deliver an outstanding set, though. Mostly material from their most recent album Omerta, which has been received well. Solid technical skills, great song writing. Always a pleasure to watch these guys.
If the quality of the bands is saying anything about the new club season, I couldn’t be happier. Bring it on.