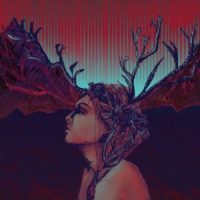 Poland’s Othalan have been kicking around for 5 years or so now at this point and have just issued their first full length with “Po Krance Gor” which I am translating as “To The End Of The Mountains”. Independently released, the album follows an initial EP from 2013 and a single from 2015 with all of those previously released tracks appearing on the album.
The album is just over 45 minutes in its 13 tracks including the obligatory intro. Othalan display a wide range of styles in terms of music, tempos and vocals so I think they will catch many a folkster ear with a nice diverse selection of tracks. If I had to pick one band to pick as most comparable I would say Eluveitie but maybe a darker version and not as up tempo or maybe a little bit of Grai. With that comparison, you know two things for sure…….male and female vocals and probably some hurdy gurdy in there somewhere and you would be right. Within the 7 members of Othalan you have a dedicated wind instrumentalist and a hurdy gurdyist along with female and male vocal, guitar bass and drums. I wouldn’t say they are forging any new paths with their sound but there are some cool ideas throughout which are promising. Some of the vocal ideas in “Kowal” (“Blacksmith”) for an example or the simple feel of “Kolysanka Baltycka” (“Baltic Lullaby”) are killer and those are just two of many in each track. The lyrics are in Polish so maybe some of the impact is loss without being able to sing along but they make up for it in energy and great tracks.
They never overdo it and know when to end a song as most are under 4 minutes…..actually most under 3 minutes. Having this many members would possibly create a traffic jam of music but they show plenty of restraint in all areas so when something is highlighted whether instrument wise or vocally, it makes an impact.
Lots of great stuff on here and a decent recording although the vocals tend to be a little too out front and maybe some things overmixed but all in all a solid debut.