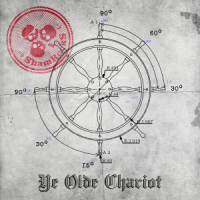 My very first approach to this album was very energic. Once I realized that I was listening to a new version of the Irish song “Star of the county down” I feel that there was something different in this covers and adaptations songs. Don’t get me wrong, despite those songs wasn’t originally from Shamrocks themselves, the music is fresh and new. It’s a very fun musical journey passing through traditional sounds heard in Kiltartan Cross, pure folk dancing rhythms such in Topor polka and Man with a plan version -that doesn’t have anything to envy from the Korpiklaani’s original- to the great guitar riffs in Der Stern der Grafschaft Daun, my new favorite version of Star of the County Down -I’m still waiting for an epic guitar solo in this version.

When you listen to the type of songs that they made, you can travel in your mind, feeling like an old sailor when listening to Roll the Old Chariot but travel forward in time while the rhythm and the instruments played are evolving, and even feeling the need -as myself- to sing along no matter where you are.

Making new versions is now a simple task, you need to give the audience the sound that they like, or the lyrics that they know, and making it fresh and new, is harder than you think. That’s the magic of Shamrocks’ music, they give you what you want and more. You will end your music journey with a lovely poem made a song: Kiltartan Cross. It will make your landing soft. Sadly it’s a short album having just 5 songs, however, it’s a nice taste of good music skills.

Now, I am looking forward to hear more new versions of different songs from Shamrocks. Covers may be played by many people, but for fresh original and very folk versions, you will need Shamrocks.”