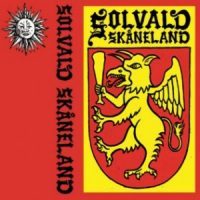 Last year while perusing Bandcamp I came across the debut from the enigmatic Solvald from Sweden entitled “To War”. While I struggled to decide whether this was an EP or an album, I also struggled with comparisons to their style with another act. A new release has cleared things up with what I would call a proper full-length album entitled “Skåneland”.
The album has 7 total tracks at just under 42 minutes and while has some touch of “To War” it also has a little more definition in the overall direction of the project. I still think The Flight Of Sleipnir and Bathory are the two closest acts I could mash together to create Solvald since there is a doominess to the overall aesthetic like TFOS (although not as trippy) along with a Viking era Bathory connection as well. With some of the synth work/sound effects here, I could also say classic dungeon era Mortiis is a tangible influence as well….or even some classic Satyricon as the vocals do have a tinge of Satyr. Maybe it is because it has such a retro vibe and overall feel to it with almost a 4-track recorder recording sound to it which makes me long for the good old days? Yes, semi-homemade with distortion aplenty but with some nice backing choral vocals and crushing riffs. The tracks are shorter in length overall which I think will be helpful to their progress….average track length is around 6 minutes or so. The first release started with a 20-minute epic (“Fields Of Blood”) and I could see where some folks might punch out and not give it a shot. The shorter tracks are more focused and get to the point…..think of a grittier “Nordland” Bathory album and you know where you will be. The tempos are mid paced for the most part with layers of distorted guitar, vocals and programmed sounds along with vocals (both backing and main) which are also a little distorted but not too much. The Viking ties are definitely there…. song titles such as “Return Of The Gods” and “The Firesword” are straight out of Norse mythology. While I would not say this is a cut and dry Viking album, for classification purposes it is the easiest thing. If you liked “To War”, I think you will definitely get into “Skåneland” as there is a little more focus and tightening up of the overall approach. Another killer release from Solvald.