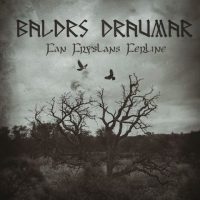 There were rumors for years, Baldrs Draumar was planning on an acoustic album. I know these Frisian guys from their folk-metal. I had the honor to watch them almost 8 years ago (hey, what’s 2 days in 8 years), I was immediately blown away, furious folk-metal by friendly folk! A few years ago they started playing acoustic shows, this became bigger and bigger, but it’s not interfering with their metal hearts. The band does both and does this well. Their previous album ‘Aldgillissoan’ ended in the top 3 at our annual album of the year list in 2015.
Now their acoustic album has finally came out of the tjuster and into the ljocht, for all who can’t understand Frisian: out of the dark and into the light. And as they are proud Frisians, it seems to me there are only proud Frisians, they sing about their ‘land’, culture and history, and they do this in Frisian of course. The title of the album translates as From Frisia’s History. And this part of the Netherlands may be a rather quiet part in the north, with a small population, once the Frisians ruled the land along the whole coast of the Netherlands, From the south up to Bremen in what we now know as Germany. This country was called Magna Frisia and their king Redbad, was known as a heathen king. This rich history is a huge source for the songs of Baldrs Draumar.
Don’t expected reworked old songs here, these songs are all especially written for their acoustic shows. These guys display their fine musicianship in these songs as well. Never overdone, everything is to the point and stripped of unnecessary crap.
The goal of this album is to gather all the Frisians to sit down around a huge campfire and listen to the hymns these proud Frisians sing on Magna Frisia. The music isn’t as dance-able as some other folkmusic, but it invites you to listen, with a pint of beer, and mesmerize about the great past. And maybe dream a little about the revival of this great country. And we can all get a taste of that, with the historical film ‘Redbad’ which is made right now and will be in the cinemas next year.

I hope we will get another folk-metal album from these guys soon, but I am very happy to listen this acoustic album in the meanwhile. With this album they ensured the Frisian history will never be forgotten and just like Redbad, Baldrs Draumar will be immortal as minstrels of the Frisian history.
Maybe this is the nicest acoustic album I’ve ever heard by a Folk-metal band.