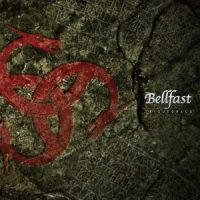 They say the way to a man’s heart is through his stomach but for me it is through my ears, and there is no better food than the flute to make me stand up and take notice. Ever since hearing the flute in rock bands like Jethro Tull and the Marshall Tucker Band I have always loved it. Bellfast has a very talented flute player along with a great violin player and a kick ass band as well.
The band hails from Japan and they proudly market themselves as a folk metal band with Viking/Celtic elements. Their sound is different from most folk metal bands because instead of a dark or extreme metal vibe they go for a more traditional heavy metal approach. This approach works really well for them and their sound … well it’s hard to describe exactly, but its two parts Iron Maiden, two parts Folk, a dash of Alestorm and Ensiferium and a top coat of Sabaton. That might sound messy but it’s not. From the opening guitar to the closing chords “Triquedraco” is a feast for the ears. The Iron Maiden influence is unmistakable and the lead singer Koh Nishino even headlines a side project called Eddie The Great, a Maiden Tribute band. The Maiden influence is also present in the songs themselves as they are not just songs but stories , (little history lessons if you will), Battle tales in the Sabaton ,Ensiferium style and stories of real historical figures, (Boudica). That flute and violin are ever present and they lay down a wonderful tapestry for the controlled fury of the heavy metal storm that is Bellfast. The sound production is great and it allows every instrument and voice to shine. The songs themselves are intresting . Each one seems to have its own style and there are little instrumental flourishes all over the album that make it really special. The song Qu Est la Rose ? displays a little different side of the band. With its minor key changes and progressive feel it tells a dark tale and its different from any other song present. Standouts include Boudica, Ancient Celtic Fire, and Black Mist Island a high seas pirate inspired song, but Bellfast saved the best for last. Sword of victory is an inspired battle song that would not feel out of place on an Ensiferium album and, Inis Mor will stick in your brain all day with its mournful and majestic sound. If you can’t tell yet I really like this band and this album. I may be fanboying a little bit since I really enjoy the Iron Maiden influence but the band is really good and they deserve more exposure. The only criticism I have, and it’s a small one, is that sometimes the lyrics are difficult to understand because of the singer’s accent. This is really not much of an issue though since he is an incredible singer. If you like your folk metal mixed with traditional heavy metal guitars strait out of the eighties do yourself a favor and check this band out.