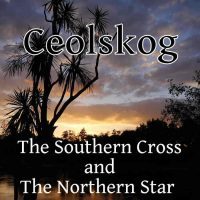 Ceolskog is the name of a solo project by Adam Halliwell from Hamilton, New Zealand. The word Ceolskog is a mix of two languages, Ceol the gaelic word for music, and Skog the Norwegian word for forest. This is appropriate since Adam is very diverse in his influences. He sings songs in at least three languages and tells stories from different cultures and all this with a great helping a metal thrown in for good measure. As I was researching Ceolskog for this review I found that Adam has posted videos for what seems like every song he has ever recorded and they are often filled with a mixture of beautiful scenery and hilarious bits with him singing his tunes. I feel as though I’ve become friends with him even though I’ve never spoken with the man. It’s a rare thing to find so much of a person recorded for everyone to see. If you like his music you should check out his YouTube page. So on to The Southern Cross and The Northern Star. This is a collection of folk songs from Norway, Australia, New Zealand, Sweden, England, and Scotland. Each song is a mixture of traditional and modern instruments. The songs are true to the original folk songs but spiced up with metal solos and given the Ceolskog twist. It’s an eclectic mixture of songs, and while not every song may be to your liking it would be hard to come away from this album without an ear to ear smile. Songs like Waltzing Matilda, (featuring Adams sister on harmony vocals), The Jolly Roving Tar, The Dying Bushman, and Skye Boat Song, sound like what they are, Traditional songs on steroids. It’s a tried and true formula and its works great here. I enjoy this album and Ceolskogs other offerings which are available at bandcamp and of course on You Tube. I am looking forward to more original music along with the traditional in the future. For now have a listen to a truly unique artist with a bright future.