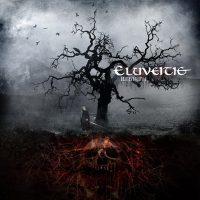 Shortly after ‘Evocation II’ Eluveitie gives us ‘Rebirth’. A single metal track, very unlike the acoustic album that was released this summer. Although somewhere you can find connections in melodies and lyrics. Apart from that, Eluveitie is fully back on the metal track.

Five minutes of folk metal the way it’s supposed to be. And that is loud, fast, with interesting melodies and rhythms and loads of original instruments. We will never forget the former members of the band, but truly the new guys stand their ground, no question about it. The raw voice of Chrigel and the clean, but powerful voice of Fabienne contrast beautifully. Several guitar solos, thumping bass and drums really take the song to another level. Within the boundaries of folk metal, this is about as good as it gets. In the last 30 seconds all the bombastic elements give us a final burst, just to leave you exhausted, yet craving for more.