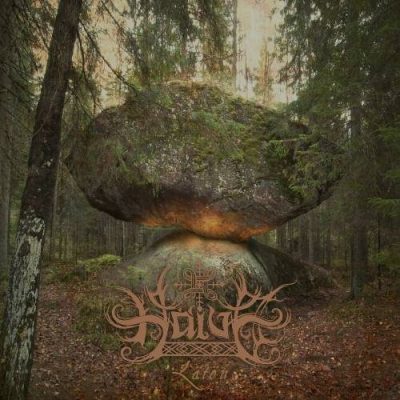 Ever heard of Häive? It’s possible you haven’t even though they have been around for 15 years. Hailing from Finland, this one-man project hasn’t had a substantial release since an EP in 2010 and a debut full length in 2007. Thanks to the magic of the internet I was able to listen to the first album “Mieli Maassa” and the 2010 EP “Saimaata El Sanoilla Selitä” and to see the progress made over the last few years. Wow what a difference some years can make as Häive should be one of those bands everyone knows with “Iätön”. Categorically I would say Häive may be considered folky black metal with a touch of Tolkienistic tendencies of acts like Duskmourn, Gallowbraid and Emyn Muil with touches of Finnish counterparts like Moonsorrow and even some classic metal with a touch of Maiden. Even with some specific comparisons they are still hard to put into a simple category. With guitar harmonies aplenty, dark, brooding vocals and mostly midpaced tempos, Häive fits into a few different categories. Tracks range in lengths from the intro “Iätön” (“Ageless”) at just under 2 minutes to album closer “Virsi Tammikuinen” (“Song Of January”) at just over 7 ½ minutes with the total album running about 40 minutes. It’s nice to hear a mood created without having to be blast beated to death so some doomy elements also creep into the overall vibe but not sleepily. Acoustic guitar is nicely added to tracks like “Tuulen Sanat” (“The Spell Of Wind”) so Agalloch could be the best overall match that I could come up with. Mastermind of Häive Janne Väätäinen has been involved in numerous projects most notably for us here Auringon Hauta so the wide selection of riff styles and tracks has an origin in his multiple endeavors. Not sure what the delays were but glad they are over and Häive is back. Soon to be issued (November 24th I believe) for new label Eisenwald (home to the mighty The Flight Of Sleipnir, Fellwarden, Pillorian and others), “Iätön” is heavy but not overly so and crosses over pretty well into black and dark folk metal.
Solid production and mix make this an enjoyable listen for sure. A great “comeback” of sorts for Häive and another contender for a top album of the year.