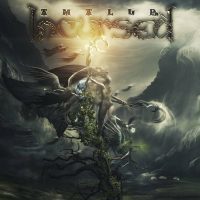 Only a couple of months after releasing their EP The Slavic Convenant Incursed is back with their fourth full length album Amalur. Interesting to see in what way the album adds to what we have already heard. In truth, I was expecting more of the same. That being fun folk metal. So I was pleasantly surprised to hear some more sides of the band than they have shown us in recent times.

For starters Incursed is not just about fun. Proper metal is being delivered. A mix of folk and power metal, and yet with harsh pagan like edges. Especially Psalm of the Accursed and The Hardest of Harvests start with a bursting power not unlike Wintersun of old. The first of these two suffers a bit from the same problem as Akelarre. Which is that the clean sung refrain take some spirit out of the song. Other than that: proper folk metal indeed.

Another new side is to be heard on A Crownless King. Clean female and male singing in a rather slow tempo. A fine power ballad which may be a good way to allow the crowd to take a breath during live gigs. Furthermore there is a drinking song with some violin, ended with a big burp. Hm, maybe I’m getting too old for that kind of sh*t.

The band score a few minus points with Brothers in Arms, a bit of a filler in my eyes. And title track Amalur does not convince me either. Within an album containing twelve songs, that not a bad score. It’s clear that we are dealing with a professional band that knows how to write their songs. They all have a beginning, body and end. Not overly complicated. Proper and decent are terms that keep coming up while hearing the album. Not world changing, but a fine piece of music.