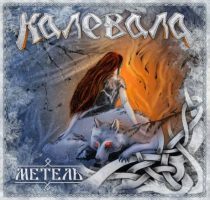 The Russian SoundAge label has another new release for us, the new Kalevala album ‘Metal’ (Blizzard). The band had numerous releases since their foundation in 2007, but after 2014 it became a lot more quiet. But they’re back with their mix of folk, rock and metal.
The fact they blend these things isn’t change, but the dosage of the ingredients is. They traditional Slave Folk is there in the same amount as we’re used too, but the music has become a bit more furious overall, there are still some rock songs, but there are more metal-based tracks on this album then we’re used too. And this gives their sound more of a bite. Nikita’s guitar still have this rather clean sound, which is one of the trademarks of Kalevala. Together with Ksenia’s voice they form the heart and soul of the band. But the guitars are sound more furious, if this is the result of not producing new albums for a few years, I hope the next album will be in 2020. But this would be a shame, the music of Kalevala belongs to the core of the Russian Folk-metal scene.
This Blizzard of Russian folk is filled with no less then 13 tracks, besides the regular 10 songs of the album, there are 3 bonus tracks. And all these songs are drenched in folk and metal-coated. Don’t expect anything really new, but Kalevala makes up for this with an overall quality of all these songs.

Kalevala has become slightly heavier with this album ‘Metel’, and that’s very nice. And what’s nice as well: this hasn’t affected the folk in their music. The band has just made a step towards a more solid metalsound on this album. Hopefully they go along this path and don’t let us wait this long anymore. ‘Metel’ is a very nice new release, their best album so far!