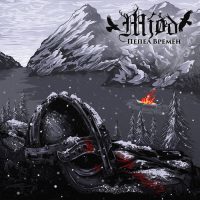 It wasn’t that long ago that Russia’s Mjø d released a debut 5 track EP entitled “Первая кровь” (“First Blood”)….actually it was earlier this year in February. I thought it was OK but definitely a starter EP for sure. Wow, I can’t believe this is the same band 8 months later with a first full length entitled “Пепел времён” (“The Ashes Of Time”). I would not believe this is the same band if you even told me since they sound completely different and definitely for the better in numerous ways. Hailing from Moscow, this now 5 piece has put together 10 tracks with 2 carrying over from the EP with remixed and revised versions.
So, what are the major changes you may be asking? Originally Mjød was a 4 piece consisting of guitar, bass, drums and vocals…..standard configuration. Now, they have added a bagpiper/flutist in Ranðgrið which has totally altered their sound and style. What I would have called a melodic death/Viking metal band may have morphed into something altogether different. Maybe a combination of Grimner, Varang Nord and Oprich works for me? Closest 3 bands I could muster up. I would also there is a thrash vibe to them as well. The tracks range from 3-6 minutes which works for their style. Singing is in Russian with deathy guttural growl vocals for the most part with some clean parts thrown in. There is some really great guitar work and overall musicianship here and if they hadn’t added the wind instruments then I think they would still enjoy some success. However, based on the sound quality of the EP, I would have said they would have had an upward battle as the EP was sorely lacking in a proper mix. This leads to my other big change which is the HUGE improvement in sound quality of the album. Finally, a band that has either spent money on a proper mix or found someone that know what they are doing around a board or computer. “Первая кровь” has a balance of bite and clarity with crunchy bass and guitar, punchy drums and natural sounding folk instrumentation. As much as I like the pipes, a little restraint would have worked and maybe some of the tracks could have benefitted from less of them to be just straightforward face smashers. What may have been guitar riffs have now become bagpipe riffs which is fine, but they could become one dimensional in that way. So yes, I could be nitpicking now but it’s only because I can hear the potential after hearing “both” versions and thinking they may probably land in between hopefully.
Check out the EP first and then “Первая кровь” and believe me you will hear maybe the quickest and best transformation I’ve heard in a long time…. solid album.