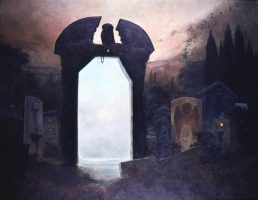 It’s hard to express exactly how I feel about Protokult. They are a difficult band to categorize. A Canadian band with European influences. A heavy rock band with folk and progressive tendencies. Male and female vocals, clean and distorted, Light and dark. The main question though is are they good? They don’t have an extensive back catalog but the songs that are out are well produced and interesting. As I said they present themselves as a folk rock group with progressive chops and they are very good at it. The music is unique and it can go from hard rock to folk to opera and into blackened rock again in the course of one song. All of this can be very good, or it can be very confusing. So now we come to the Dark Stumble Home, an EP released in 2016 it showcases a quieter side of the band. Of the four songs presented ,three are originals with “Marzena “having already been released in a different form, and” City” a cover of the Legend song. All the songs are very well done and I think if you are interested in quieter music they are worth a listen. The acoustic version of Marzena is so different from the original it seems to be a different song and that is a good thing. Having listened to both I don’t really have a favorite they are both excellent. The cover of city is really good I like it better than the original. When I first listened to the EP I thought that I had heard it before but I couldn’t pin it down. Very interesting use of Instruments and vocal harmonies . the other two songs, Winters end and Forsaken shores , are also good particularly,”Forsaken shores” a nice song with extended instrumental sections and a touch of blackness. The vocals by Ekaterina and Martin Drozd are tamed down somewhat from what you will find on the bands heavier songs and the harmony enhanced. In short the album is a worthwhile listen especially if you like Protokults folksier side. I wish it was longer but it makes me look forward to seeing what they have for us especially after the the single Oy Kanada! Released around the same time.