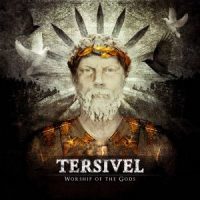 There have been some pretty killer acts from Argentina (Vorgrum, Skiltron and Barloventos come to mind and many others) and now a 2nd full length from Tersivel has arrived. The official release date is October 27th for their sophomore album entitled “Worship Of The Gods”. It has been a while since the last album (2011’s “For One Pagan Brotherhood”) so I’m sure many people may have been concerned with the end of Tersivel. No idea what the delay was but they have come back with 12 new tracks totaling almost an hour of music. There are some instrumental/transition tracks here which help tell a story, so I may loosely call this a concept album as the ancient world seems to be a backdrop for the tracks. If you are going ancient Rome or anything Mediterranean I think a comparison to Ex Deo will arise at some point and maybe at some points Tersivel could be similar. However overall, I would call them power metal more than anything else with touches of melodic death mixed in. With soaring vocals and keys, maybe a little Ensiferum, Rhapsody of Fire, Dream Theater and Elvenking? Well somewhere in that neighborhood I think works for me. There are tracks that are more keyboard driven and then others that are more guitar driven so a nice blend and diversity and again, gives you a concept vibe. Vocalist Lian Gerbino also doubles as lead guitarist so he is extremely busy here being able to pull off the riffing and singing and doesn’t drop the ball in either job. Remaining long time member Franco Robert on keys is now joined by newer members Camilo Torrado on Bass and Andreas Gualco on drums who both joined a few years ago so that may be the explanation on the delay….time to write and gel as a band. Lots of great highlights on here…….stand out tracks for me “Live To Fight”,” Hymn To King Helios” and epic album closer “Vicsti Galilaee” at almost 13 minutes long. I don’t know if some of the instrumental/transition tracks are all that necessary here but kudos for adding them in. For a band that as a whole has only been around a few years with this lineup, the cohesiveness is apparent in the song writing and musicianship. Really no folk to speak of other than some key arrangements that have some folky instrument effect. The mix is tight with a crunchy guitar tone, punchy bass and drums and keys which at some point can be a little much but works even if it is up front. Vocals vary between a whisper, baritone and death metal style and all command a nice place in the mix as well.
A momentous return for Tersivel and one which will get them some notice now that they have returned….a solid album.