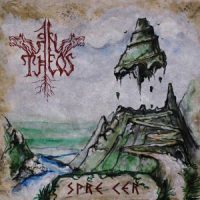 Romania’s An Theos impressed me quite a bit last year with their first album “Semintia Daca” so much so they earned a spot in my top 10 debuts for 2016. Seemingly out of nowhere (or maybe I just missed the news about it) they have just released their follow up entitled “Spre Cer” (“To Heaven” as a possible translation?)
They have put 8 new tracks together at around 39 minutes so an average track length of just under 5 minutes. Romania has always been known as an exporter of killer metal acts such as Negura Bunget, Syn Ze Sase Tri, Ashaena, Bucovina and many others and I would say An Theos is probably the folkiest band out there, leading the charge in a folk metal wave from there. While my previous comparisons to Boisson Divine and Kanseil I think are still valid, how about adding some Grai and even Trollfest as possible influences too? Yes, definitely killer. With 8 members (yes, I said 8) you would think it could end up sounding a little messy but nothing could be further from the truth as they have a refined sound and show a lot of restraint in making solid tracks. With female and male vocals in Romanian (assuming) split almost 50/50 this time around, “Spre Cer” has a more accessible sound while being very experimental I would say. Tracks like “Ai Codrului” have a very dark yet upbeat feel, complete with tons of folk instrumentation plus native Romanian ones like the Tulnic (alphorn). Primary folk instrument for the most part is violin with some mouth harp while keys fill in the rest. I feel that this album is more well balanced with careful though given to which style of vocal is used and who sings the various parts, giving it more diversity while still being An Theos. They have employed numerous rhythmic changes, using different accented parts, staccato and stops with guitar, bass and drums to immense success here.
Is this a nod to Romanian folk music thru the An Theos metal machine? I can’t say I’m super familiar with Romanian traditional music but I can only assume a lot of this is inspired by it and modernized to today’s folk metal style. If you liked “Semintia Daca” I would say this is on par with it with some nice additions to their sound. You could also check out their sister project Ka Gaia An as well if you wanted a little less folky version.
A nice mix definitely works here with easily discernable music and vocals no matter what style the track is. All in all, a noble follow up and shows that An Theos was not just a “one hit wonder” but a substantially talented act with a bright future……