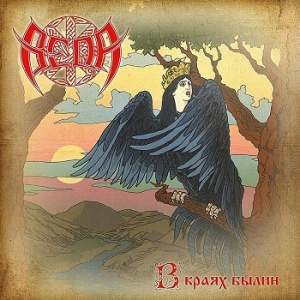 There have been a large number of folk metal bands coming out of Russia and the former countries of the USSR lately and this is a great thing for those of us who enjoy this type of music. There is urgency and an exotic beauty to most of this music, whether it’s dark/pagan/black metal or more melodic folk metal all of it has the feel of the region that it originates from. It’s a land covered with forests and remote mountain ranges and the beauty and tragedy of the people who live there comes through in the stories they tell and the music they make. Veda combines folk melodies and metal like most of these bands but it stands out by being both outstanding musicians, and outstanding composers. The album ,”In Epic Lands”, is filled with dramatic changes in mood and tempo and the melodies and vocals soar above the thunder and paint a glorious picture. Keyboards and flute give the songs deep texture and female and male voices mix to great effect. Throughout the album each instrument and vocalist is given the chance to shine and the music swells into a metal storm and then suddenly calms and gives way to soulful female vocals, the trilling of the flute or a piano solo. This makes me wish that I spoke Russian so that I could understand the stories they are telling but it doesn’t detract much from my enjoyment of the songs because they are so well composed. Standout tracks for me include the opener, “In Epic Lands”, “The Forest Spirit”, and the very dramatic “Autumn”. Track four,”The Shepherd Boy “has a folksier tone than most of the album with flute and accordion? “Kvasura”, while short is the most metal song with galloping electric guitar and growling vocals.
The album is well put together and provides a great soundtrack for a walk in the woods or wherever you listen to music. The songs are mostly shorter but a few can wear you out towards the end with repetitive rhythms. Overall “In Epic Lands”, is a solid and accessible album with some really outstanding tracks. Great job!