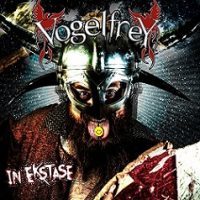 Vogelfrey’s 4th studio-album ‘In Ekstase’ is here. What would it bring us, their previous studio album ‘Sturm & Klang’ disapointed me a bit. It lacked the tension of ’12 Schritte zum strick’ a bit. It became more of a gimmick to me, so where would the successor of this album lead us?
Would this new album bring me ‘in ecstasy’? The band sure knows how to write catchy songs as they prove in ‘Mittelalter Rockstar’ (Medieval Rockstar), and ‘Rauschpfeife’, songs in which they prove their sense of humor as well. The songs are almost all drenched in humor. Where Feuerschwanz uses the tag humerous, Vogelfrey could use this as well, finding a serious Vogelfrey song, is difficult. Only looking at the titles of the songs says it all, when you know ‘met’ is the German word for mead, you will agree ‘Crystal Met’, but I can affirm, this is fused into the songs everywhere. Reason enough to learn German, or at least have a good translation of the songs.
Nothing new so far, but something has changed definitely in their music, the music has become a bit more darker, theatrical, due to the more important role of Johanna at the Cello and Alex at violin. Where they used to fill in the gaps in the music, they have an important role in a lot of songs on this album. This creates more tension in a lot of songs.

With ‘In Ekstase’ Vogelfrey shows they’re not at the end of their journey at all, but they’re still alive and kicking. And since they have added more music to their humor, they have enough in stock to create more songs. With the incorporation of the violin and cello, the music has matured a bit and has become more interesting compared to the songs on their previous album. Vogelfrey is back!