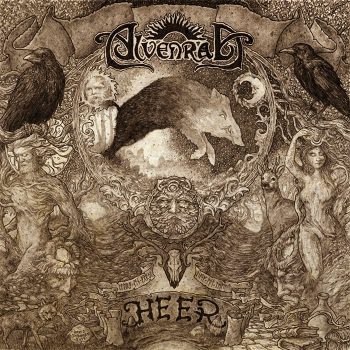 There have been quite a bit of bands that have incorporated retro/progressive music into folk metal…..killer acts like Wilderun, Eikthyrnir, Lör and maybe most notably the epic Borknagar. If you haven’t heard Alvenrad then you should know that they no doubt should be included in the conversation. Hailing from the Netherlands and signed recently to Trollmusic, they have a sophomore album coming out entitled “Heer” (“Noble Man”) in December. Now when I think progressive and retro, I am speaking of bands like YES, Deep Purple, Kansas, Genesis, Jethro Tull, ELO, Rainbow and numerous others and that is the era of music that Alvenrad has resurrected into modern day folk metal stylings. I think the question will be from the start if this is a “folk metal” album as the progressive nature of it seems to be far outweighing the folk. While I don’t hear a lot of folk going on with a part here or there, “Heer” doesn’t really fit into any specific box so keep an open mind while listening. With tons of Hammond Organ reminiscent oriented tracks, “Heer” strikes a new path in metal far from any connection previously attempted and with each passing listen for me unveils something new and mind altering. For some reason I am reminded of how The Flight Of Sleipnir has bridged the divide between doom and Viking metal with great success. Alvenrad has taken that proggy goodness and pushed it into the 21st century with bombastic abandon and have created a modern interpretation of Norse mythology thru it. Lyrically, the album is based around the Skirnismal from the Poetic Edda. While the concept album vibe isn’t there per se, the album does make more sense to listen to linearly from beginning to end. Is a comparison to someone like Mastodon warranted? Another possible contender but as you can see, there are tons of ways to look at Alvenrad and no two are the same…….definitely enigmatic but not sufferingly so. Original members Mark and Jasper (Guitar/Vocals and Keys respectively) have now been joined by two full time members in Thijs on bass and Ingmar on drums and I think that is a big reason for the high output of intangible music being issued forth. With a full lineup, it definitely allows for the music to propel forward, going in a multitude of directions and it certainly does. The tracks also start off rather short and instrumental based and get longer and more complex both musically and vocally until the last note is played. I would say this is an album you really have to listen multiple times to and then it will just click and it makes sense. The mix is super clean and lively which lends itself to making the music that much more exciting to listen to, instead of possibly missing all of the killer stuff going on with a foggy sound.
Trollmusic has another gem on it’s roster now (joining King Of Asgard, Byrdi, Fornhem and others) and Alvenrad is filling a space that it has created where they stand alone. An epic album with no comparable acts and a look into the future of where folk and progressive music are headed together.