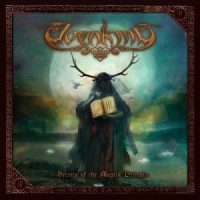 Hearing some new material from the Italian power/folk-metal band it’s always good news, and in its 9th album, they are bringing us the very well known Elvenking style from the very beginning. According to band’s singer Damna or Damnagoras “a full Elvenking metal album, and I’m sure it will be a very important (and magickal) step in our history”.
The album starts with ‘Invoking The Woodland Spirit’, the song from the band’s latest video and one of the 3 songs already released since October with ‘Draugen’s Maelstrom’ and ‘The Horned Ghost and the Sorcerer’. Across the album, they keep their powerful sound which is clearly welcomed starting with the music explosion in the very early seconds of this record. Their famous power style its more noticed in songs like ‘A Grain Of Truth’ and ‘The Voynich Manuscript’, but it gets a very special taste in songs like ‘3 Ways To Magick’ or the already mentioned ‘The Horned Ghost And The Sorcerer’; Power metal songs with an ancient essence, enjoyable soft melodies and nice choirs and guitars -without leaving aside the impeccable instrumentalization.
This album has all the fan’s loved Elvenking style, a great piece of folk-metal and as stated by the studio, their “most epic and elaborated release” [so far]. We can rest assure hoping for the evolution of their sound continues bringing us great songs in the future.
The swap of the drummer from Symohn to Marco Lanciotti could be more exploited in the mixing, but we can still feel more of Marco’s talent in live concerts and next material, so keep tracking the band for a final judgment. Also, the contribution by Angus Norder in the harsh singing and voice guest appearance by Snowy Shaw (King Diamond, Sabaton, Therion, Dimmu Borgir, among others) provides great outcomes without altering the album nature.

A “must” song in this release should be ‘The One We Shall Follow’. A song with strong folk ambiance evidencing months of hard work, ending peacefully in ‘A Cloak Of Dusk’ -unless you have the Vinyl or Digipack with 4 bonus tracks. In summary, an indispensable folk metal album to hear anywhere and anytime. Great acquisition to have.