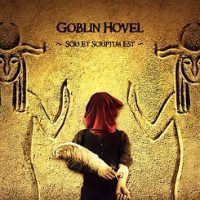 Equally prolific and epic is the Goblin Hovel. A full length from earlier this year (July’s “La Citta Dei Tre Volti”) has now been followed up with a 5 track EP entitled “Scio Et Scriptum Est” (“I Know The Script” works for me). Right now, I am in a euphoria after having them perform at my folk metal fest for the 2nd time so more GH is always a good thing.
They have put another classic under their collective belts with this EP and it has a little bit of everything for you discerning GH fans. Not familiar? Well shame on you for not partaking of the Hovel in all of their metallic folk glory. Yes, metallic folk, all acoustic instrumentation with metal overtones and it is heavy as gravity. There is really no act I could directly compare to them to….maybe a darker non-piratey Dread Crew Of Oddwood? Who knows? The comparisons are difficult to come up with and really unnecessary as they have carved their own path into the deep dark forest. The EP opens with a 2 minute instrumental “The Curious Case Of The Clockwork Ibis And The American Arcanist” into a more subtle track from them in “The Lamp Lighter”….primarily acoustic guitar it sounds to be me with varied vocal patterns. Next up is the more upbeat and campy “Parlour Trick” …..you’ll understand what I mean when you hear it. “Deshret” descends into a darker place as it grabs at middle eastern/Egyptian harmonies throughout and moves into a frenzied state until it’s close. Last track “The Museum” brings back you into light with a less over the top but not less powerful approach….stripped down into the close of the EP. At 20 minutes, it still has a punch even if the more raucous side of them is not as prevalent. They are still heavier than most and will continue to be, even though there may be a slight hiatus with some of the band members moving to other locales. Whatever the future holds, GH has enough music out there for millenia to come.
I’m not sure if everyone gets what Goblin Hovel is doing but that’s OK. I will continue to be a faithful follower and enjoy the cacophony they create with each release. Did I say they were heavy? Heavier than a bag of anvils….. another classic.