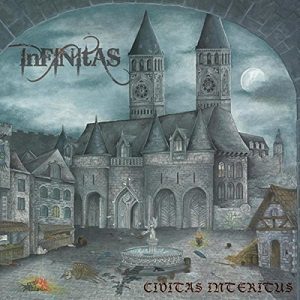 A lot of great metal bands have originated in Switzerland. Most notably, Celtic Frost, Krokus and of course ,Eluveitie. Switzerland is also where my family history begins so I am always interested in all things Swiss. I had not heard of Infinitas until the album Civitas Interitus landed in front of me.
What I found was a pretty good record full of melodic thrash with some folk elements added for extra drama and ambience. Civitas Interitus, is a concept album that tells the tragic story of Lunatris, a city attacked and destroyed by a host of demons and its one survivor who must outwit the monster Skylla to escape. The songs each detail the horrors of the demon horde and the dark fairy tale of Lunatris. It’s an interesting concept and the songs flow well together making good use of each instrument to enhance the drama and propel the story. Andrea Boll does a great job with the vocals using both animal growls and screams along with almost operatic cleans to the point where she seems to be two different people. Drums, guitar, and bass thunder and howl throughout and the album moves along well by the use of interesting melodies and key changes. Violin and keyboards swirl through the songs adding folk elements that work best in songs like the mid-tempo,” Labartu” and “Skylla”. All out rockers like “Alastor “and” Samael” compete with more textured songs like the serene” Aku Aku “and the Celtic themed “Morrigan” and the songs are composed well enough to keep the listener engaged. I have found Infinitas to be a band to watch. They have pulled off a pretty good album here and a concept album no less. I would love to see more use of folk instruments in the future but for sure keep the hard edge. Another great Swiss band to follow.