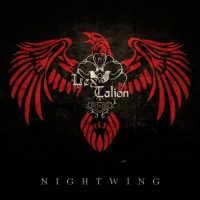 Lex Talionis new EP “Nightwing” was a nice surprise. The songs are powerful and I could see cool influences in these Argentinians guys, mainly Thyrfing and Arkona. I gave rating 8 in 10 because of the clean vocal. Is not bad at all, in fact, Federico Vogliolo has a good voice, but I didn’t like it in that context.
The harsh vocal from Ramiro J. Pellizzari, in turn, is really impressive. The band also has Lautaro A. Rueda (Drums), Daniela Martinez (Keyboards) and Anvil Manuel Luna (Bass).

The EP has four tracks, while “Sons of Chaos” and “Nightwing” are the originals songs. There is also one cool Manowar cover, “Battle Hymn” and an acoustic Blind Guardian-like version of “Nightwing”.