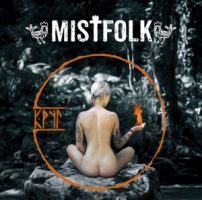 The Russian folk metal explosion continues to assault my senses with the release of Mistfolks, “Circle”. Wow! What a great listening experience. I was instantly drawn into this album. The opener “My Fate” starts with quiet keys and woodwinds and then horns announce the opening of one of the most interesting songs I’ve heard in a while. The interplay of whistles and heavy metal reminds me instantly of Eluveitie but Mistfolk is not content to just be similar to other bands they are definitely their own band. The tracks displayed on Circle reveal the many sides and moods of a very tight band. Folk instruments,(especially whistles), feature into all their songs and it is glorious. Mistfolk is a true Folk Metal band in every sense. They use Beautiful rhythms and melodies to anchor their sound and then layer on surprising heaps of metal and interesting vocal styles. Sometimes they sound almost punk, sometimes full out metal, sometimes almost classical, but always anchored to folk roots. Full orchestration and even horns feature into the music regularly to add even more depth. The songs are honestly all highlights and it is hard to pick a favorite. Each time I listen to the album I find something new to love. The already mentioned My Fate , Circle, and Wind Song are midtempo paintings set to music bringing to mind bands like Eluveitie and Korpiklaani. They kick into another gear on more up-tempo offerings like” Pan with us”,” Fest Song” and the Alestormish ,” Captain”. “Macphersons Farewell “sounds like Scotland landed square in Russia, and the solid metal song ,”So be it”, rolls along with big guitars and bass. I think this album will be in my ears for a very long time it is very good and I think it deserves to be heard by anyone who enjoys folk metal. While I really enjoy the vocals in Russian, if they sang in English I’m betting this band would be in the ranks of folk metal royalty. A definite contender for album of the year for me.