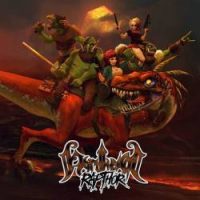 Look, I know my listening tastes this year have gravitated towards the heathen folk releases this year big time. Sure, some heavier stuff has been on my listening rotation too. Where is the out of control, dark and dirty, swampy folk metal in 2017? Only a few here or there like Bergsvriden and Drunken Fury jump out at me.
Well, I might just be crowning the king of the bogs this year with the latest from Canada’s Nordheim. Has it really been 4 years since “Refill” came out? Hard to believe. Set to be released on November 24th, “RapThor” has 8 face smashing tracks in its 40 minutes of playing time. Let your melo-death juices flow as you get pulverized by track after relentless track, fueled by booze and chicks. Think of “Reign In Blood” era-Slayer meets Trollfest and Æther Realm with some Svartby and throw that into a boiling pot and you may be cooking what Nordheim is serving up. The last album that comes to mind as the most direct comparison was the last Varg album (“The End Of All Lies”) where every track is breakneck and punishing. There is no delaying the inevitable as album opener “Troll Riding A Raptor” sets the tone for the semi-serious and definitely hyper remaining tracks. Double bass charged tracks from beginning to end with deathy, screechy vocals and shredding riffs. There is no “OFF” button here…..it is full ON all the time. Besides the obvious speed here, if you peel back the layers you will hear some nice augmenting keys and some killer backing choral vocals. Just want a two-minute concussion? Go right to “I Wish You Were Beer” with it’s nod to an Irish style track with a bit of a swing to it. Serious stuff is on here too including epic album closer at almost 10 minutes with “Dragonthorn”. This album is hitting at the right time and has been a constant destroyer to my speakers since I received it. I think this could be sneaking into many a top album lists with only a few weeks left in 2017. The mix and production are thrashy and raw in a good way, abrasive yet clear guitar, pounding drums and bass with enough attention given to vocals both primary and backing.
If only other bands spent the time to make it sound this good, the world would be a better place. A triumphant return for Nordheim and an end of the year stocking stuffer for album of the year candidate if I ever saw one… season’s greetings.