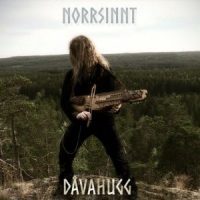 Me and my obsessions. Uncontrollable they are and one of them is Sweden’s Utmarken. Easily best debut from last year and probably my album of the year for this year with “Forfallstid”. Unfortunately, I should have been giving more love to Mathias Gyllengahm’s other project Norrsinnt. For some reason, it has been slightly off my radar with all my attention on Utmarken.
Well with the release of “Davahugg”, I am now more focused than ever on Norrsinnt and for good reason. Is there a way to compare the two projects? The obvious comparisons are the use of the Nyckelhapra (keyed fiddle) and Mathias’ amazing vocals throughout the 10 tracks (9 plus alternate version of album opener “Kraftpunkt”) Truth be told, most of these tracks have been released as singles since 2015 but putting them altogether in one concise package is the perfect vehicle to listen to them in one shot. The one thing that jumped out at me while listening is the whole mood is more subdued than the Utmarken material and while I wouldn’t say it is less metal, it definitely has a different feel. More traditional? Less progressive? Hard to pin down exactly what the differences are, and it really doesn’t matter. I guess you could say this might be a darker, more mystical version of his Utmarken material at least as a point of reference. The tracks are in the 2-5 minute range and total about 39 minutes or so and with as much soul and passion in the tracks, it will seem like a blink of an eye. Since the album tends to be a little more instrumental oriented, tracks like “Rötter” and “Skogstjärnen” are not just filler but help tell the story as a whole and offer a nice transition. I would almost say this may be more experimental than the Utmarken material with various vocal passages and song structure that appears to be way different. “Tiden Går” and “Slutet” back to back are the jewels on this release for me with a build during their 5 plus minutes of guitar, vocals and bombastic percussion. If you are a fan of Utmarken like me, Norrsinnt has some of the same tonal qualities but may not be as catchy in terms of what a “traditional” metal song is….who am I kidding? I just listened to this 5 times in a row so it has a degree of catchiness to it that is more subliminal. The mix is definitely highlighting the nyckelharpa and vocals as it should but everything has a full, rich and natural sound. “Davahugg” may not reach out and grab you on the first listen but after a few times on repeat it definitely fills your soul with the spirit of the north.
Mathias you have done it again. Another amazing album.