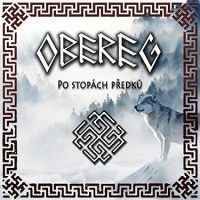 These days every band seems to claim a different niche within the metal scene. Wolf metal, battle metal, blackened pagan Viking folk metal. The list is endless. So it’s rather refreshing to discover a band that calls its music plain and simple: folk metal. For that alone Czech band Obereg deserves to be reviewed. Already the second full length for them. The first one not really making a huge impression. How about ‘Po stopách předků’?
Start is promising. True to form, a prominent role for the flute in the intro. Followed by ‘Kostějové’, a nice enough up tempo song with counter rhythms. In the typical Eastern European style, like Dalriada. Not overly mean, no wall of sound, just a couple of guys enjoying a drink around the campfire, making some folk metal. The bands keeps most songs short, mostly around three or four minutes. So far so good.
Unfortunately from there on, things start to go downhill. ‘Daarie’ is okay, but the flute isn’t always on key. How can that happen? Not enough time in the studio? Alas, later on the album, the same thing happens again. That’s just poor craftmanship. The other musicians master their instruments better, although I couldn’t point out any exceptional skills. But what’s even worse, after the third song there is hardly any energy left. Not just because of lack of speed (I am slowly learning to appreciate slower songs, thank you). The songs just sound uninspired. They are not really bad, just not very entertaining. An example of this is ‘Bitva u Loděnic’. Now that’s a filler if I’ve ever heard one.

True folk metal, just not very well executed. That sums it up for now. Improve your skills on flute, put in all the energy that you’ve got and there still is a chance on becoming a player in the scene. Stay like you are and I am afraid not much will happen in the future.