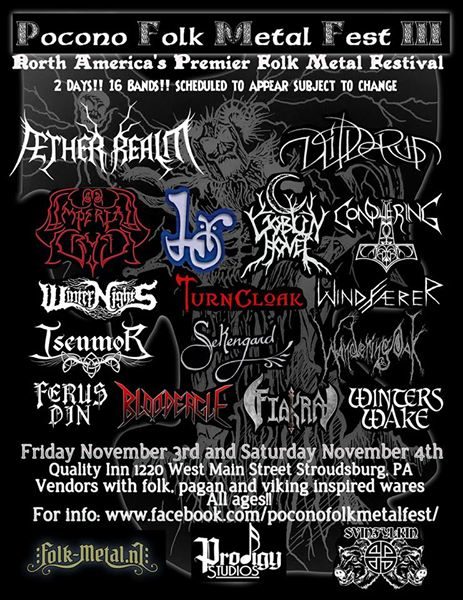 First of all this will be heavily biased….. let’s get that out of the way right up front. The 3rd installment of the Pocono Folk Metal Festival took place November 3rd and 4th in good ol’ Stroudsburg, PA USA. As the festival organizer, it was once again a challenge for me to narrow down the bands that would get on the bill. Over 40 bands applied, and a final decision was made on 16 to perform. They represented a few returning acts as well as new ones with styles as varied as acoustic based to full on black metal and everything in between. We once again took over the entire half of the Pocono Plaza Inn with the ballroom acting as the performing area and the adjoining hallway and lobby to act as the vendor area.

The day started with getting things set up…..vendor tables, the stage, the sound system, the lanyards….all of these things plus more had to be ready to go for a 6PM door opening and 7PM bands starting time. Luckily, we had an amazing and dedicated group of volunteers on all fronts attacking what needed to get done. Vendors started loading in all of their beautiful artwork and wares and bands from both nights started arriving as well. For me, it is a blur as getting to watch the bands from beginning to end never is a reality, but I did get to see parts of all of their sets….and not one of them disappointed.
Friday night featured local Viking thrash act Bloodeagle, folk black metal act from Buffalo NY Ferus Din, progressive metal with Lör from Philadelphia, The Conquering bringing black metal from Ohio, returning Baltimore heroes Isenmor and for the 3rd year in a row, NJ’s heaviest act Windfaerer. Every single band destroyed as the sound (provided by Prodigy Studios) was top notch and everything ran smooth with only minor snags. The crowd was super into it with the other bands as well as fest attendees filling the room. The mead was flowing all night and the bar sold out. We sold out of all of the shirts as well. So, what would Saturday bring? More of the same…

Saturday was going to be a much longer day with bands starting at 1PM and doors opening at noon. Additional vendors arrived to set up and all the days bands started to arrive. However, the crowd was slow to arrive and as NJ’s fantasy metal act Fiakra started the show off and for the next few acts (returning warriors Last Legion and the epic Wandering Oak) there were very few people in attendance. Very disappointing. These acts all crushed it. A pulse started to be felt as Baltimore’s Sekengard hit the stage at 4PM and it seemed a few more people started arriving but not what was expected. Winter’s Wake, Turncloak and Winter Nights all played superb sets as well but again the wave of people never came. Luckily, with all of the bands, volunteers and vendors we had approximately 140 people right there who filed in and out of the room to catch the acts. Goblin Hovel played their last live show for the foreseeable future and didn’t disappoint leading into the last two acts, Wilderun and Æther Realm. Talk about a 1-2 punch. The people that were there were in a frenzy for the next two hours until AE hit the last note at midnight. Wow what a night. I am severely underselling how amazing the event was.
I got to hang with a lot of my old friends and meet a bunch of new ones. The resounding theme was what a great time everyone had but disappointed at the turnout. Will there be a part IV? I can’t say as losing money is not what I want to keep doing but we will see. After being awake for almost 60 hours I finally passed out thankful to get some sleep….. and you know what? I would do it all again. A glorious weekend of folk metal madness.