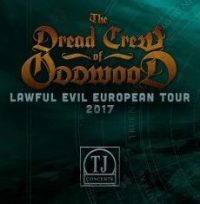 A Friday night, 200 kilometers from the sea, our home is looted by a bunch of American Pirates. You don’t want to miss that sight for sure. For a change I don’t have to drive for hours to visit such a band, I can hop on my bike and set sail for The Dread Crew of Oddwood, in our local Irish Pub Home.
This is the first night of their European Tour and their first concert in Europe! An evening full of Heavy Mahogany, and you can tag your music everything and since they’re quite unique, in playing quite heavy songs, but in an acoustic way, I think a better tag is Acoustic Folk-metal.
A year and a half ago, I got to review their album ‘Lawful Evil’ and I liked it very much. The band is Original, witty and above that very talented musicians, I could imagine this in a local pub, and here they are, proving me….
More than right, the six guys filled the tiny stage, and when I say fill, I mean fill. They were there, seemed totally comfortable, like they were at home (bad joke). They laid down a very nice show, in which the whole band was moving on stage, partying, treating the audience with fine songs. Obvious when you play songs with funny lyrics, you are even funnier on stage and their frontman took the opportunity to host this show in a humurous way. And this was backed up by the whole band, the fun was dripping of the whole band.
They displayed their fine skills, by displaying all kind of practical jokes on their music, without being messy.
After a short pause they played a second set, the first set impressed me more. Probably caused by the alcohol consumption, this set was a bit more messy, but still very nice. The band surely know how to infect you with their contagious music. It doesn’t matter, what music you prefer, The Dread Crew of Oddwood drags you along in their music. Great performance!

The Dread Crew of Oddwood