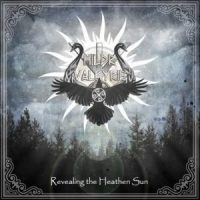 I think the name Hildr Valkyrie should be familiar to most of you for her work in two projects, international acts Folkearth and Folkodia amongst numerous other contributions. You may not be as familiar with her solo endeavor under the Hildr Valkyrie name and with “Revealing The Heathen Sun” you will become well acquainted very quickly. It has been 9 years since a release under this project name (“Shield Brothers Of Valhalla” debut album in 2008) so I can understand how the solo stuff has been off the grid.
She has returned with her best effort in any of her projects with this new release. I will admit I haven’t really gotten into the Folkearth/Folkodia discographies much as I think that overall there is a lack of cohesiveness but that is another tale. “Shield Brothers…..” was extremely promising and “Revealing….” Is a continuation I feel of that foundation that was laid down and more. Stylistically, I think she has a vibe that borders between heathen folk and folk metal. A comparison to my favorite heathen sorceress Runahild is definitely where I would start in describing Hildr Valkyrie to anyone with a blend of two artists she has covered in the past in Falkenbach and Viking era Bathory. She handles most of the musical aspects and obviously vocals on here while Jan Twothousandarrows from Folkearth/Folkodia handles the guitar and bass while both share some of the drum programming. Hildr’s vocals are the primary reason for listening and she doesn’t disappoint and shows off a variety of styles. There are various choral parts along with the primary vocals which add immensely to the tracks….almost like another riff on top of the guitar riffs. She also does some nice self-harmonization (if that makes sense) giving more dimensionality to the songs as well. I think the black metal vocal style was a big surprise for me as I don’t recall her employing this style previously and it works to much success when used in tracks like “Final Blot” and “My Oath”….she can do it all. The biggest improvements for me come in two forms from her previous album. First, the tracks are better structured, and more metal/guitar based then the tracks on “Shield Brothers….” with guitar soloing and more defined riffs. Kudos to Jan for his playing and adding the right amount of shred for this album.
Secondly, the entire album has a fuller better produced sound so a more enjoyable listen all around. I would be remiss if I didn’t mention that Runahild makes a guest appearance on here providing vocals and lyrics to “Summoning The Heathen Fire” and she is perfect as always and it is killer to here her in a more metal setting. An excellent return for Hildr Vaklyrie and hopes of more material under this namesake I hope come sooner and not later.