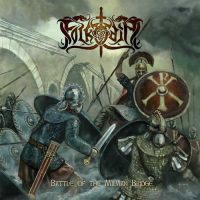 Do you know people whose standard response to any question is ‘Yes and no’. No matter the question, these people always are able to see good and bad at the same time. Don’t you hate that? I do. And yet, if you would ask me whether I like the new album from Folkodia, that would exactly be my answer.
This multi-international band used to release an album every year. As a consequence, the quality varied considerably. Now the band took four years to release another full album. The result is that the good aspects of the band have even improved. Alas, the negatives remain as well. Thus, the yes and no. Yes, the band produces some fine folk metal. Influences from all over the world. And yet it sounds rather Eastern European to me, albeit that the lyrics are in English. And no, not all is well on Battle of the Milvian Bridge.
As often, the faster songs bring the most joy. The Maiden of Lorraine contains multiple vocal variation. Male, female, clean and harsh. Great guitar melodies. In fact throughout the entire album the guitar melodies are one of the most outstanding features on the album. Truly melodic and still heavy. I love it. The song also shows one or the lesser points of the band and that is horrible pronunciation. Even if you are from Italy, Russia or Greece, if you sing in the English language, try to pronounce it properly. And not like any cheap power metal band from the south of Europe.
Battle of Salamis (really? Sausage war?) is a bit more spooky. Plenty of double bass. The semi-spoken word reminds us of Ancient Rites, funnily enough. The song does lack a bit of purpose somehow. Where are you taking me?
As mentioned, the band has some evident flaws. One of the biggest is the vocals being off key on a regular basis. Don’t you have all the time in the world to record the singing? If you don’t, bring a better singer! Flutes on Hussar Angels are also on the edge of off key. That really counts as a big negative in my book. Most catchy song would be Sigillum Militum Xpisti. Ensiferum-y. Again though, vocals not quite on cue. The album ends with Red Rubicon. A very simple song, Low male singing, miserably performed.
So there you have it. Some capable musicians, nice song writing, great guitar playing, but awful vocal achievements. The latter means I won’t be listening to the album again any time soon. Change a few singers and I’ll be happy to listen to the next album.