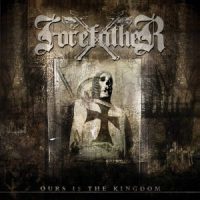 In what has become an annual traditional, another epic reissue of the Forefather catalog by Heidens Hart is upon us. Now coming out is the 4th album “Ours Is The Kingdom” originally from 2004. Reviewing music has it’s challenges on some level, writing about your impressions, comparisons to other music, etc….. but when it comes to a reissue, it is a little easier.
By easier, I mean this is an album I’ve heard countless times and consider it one of my favs from them. I know the songs from hearing them literally hundreds of times so what more could I possibly say? Let’s talk about two of the new changes for the reissue. First, a bonus track is included on here which I don’t recall having heard previously……”Fighters Of The Angelcynn” is the closing track on here at about 5 ½ minutes or so. Mid paced and classic Forefather (what isn’t?) this track was originally supposed to be on one of the Folkearth albums (international folk metal project with 12 albums to their credit) but for some reason didn’t make it. I think sonically and stylistically you can tell it was from a different session but its another track that we can now add to our collection….a great addition. The 2nd change and the whole reason for the reissues for the most part is the far improved mix and mastering of the tracks. There is no question that the reissue sonically has a more well rounded sound to it with instruments blended together better than the previous version. I would say that this has the feel of a more contemporary version to the original and is on par with anything else released today in terms of overall sound quality. Athelstan and Wulfstan mastered this version and have vastly improved the tracks to be even more devastating than the original versions…..I know it’s hard to believe but it’s true. For me, the less twangy bass sound and smoother attack plus some reverb here and there make this like listening to a new album. From the opening seconds of the skull crushing “The Shield Wall” you know that you are going to get pummeled. Their instantly recognizable sound I think was solidified on this album and whether it is the breakneck material or the mid paced tracks it is always epic.
If you don’t own the original then now is your chance to scoop up an essential album for any metalheads collection. Congrats Heidens Hart and Forefather for yet another job well done.