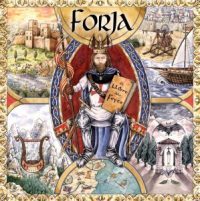 Listening to the new release from Forja, we can notice their evolution to a more definite sound and with more quality and energy than their previous work. It is noticeable that this has been a work made with effort and a lot of heart; a project that came to the light partially by fans´ support through crowdfunding, and partially by their own means in order to give us a power-folk sound where the band introduce us the history of King Jaume I of Aragon (James I), important character in the Spanish monarchy back in the XIII century.
From the album’s beginning, the atmosphere has been created to show that there’s a story being told, reflected in their lyrics full of history and paganism, which works well with into the folk-metal genre.
The instrumentation in El Llibre dels Feyts it’s absorbing and seeks to complement the drums and guitar riffs loading each song with mightiness. I consider that some elements in the sound could be improved in the mixing and edition avoiding loosing one or more instrument’s sound among the others or preventing the weakening of those good melodies that remain in your ears along with the voice -waiting that in future projects, voice and choirs will be highlighted looking for more épic songs easily remembered by the audience.
The most distinctive thing about this work is the Catalan language in which the story is being told, opening the path for everything that Forja want to tell us about their land and culture.
In general El Llibre dels Feyts, it’s a nice folk work with some opportunities for improvement. We can rest assured the band´s determination and we will be glad to hear some future releases from them.