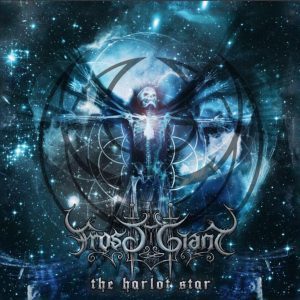 Frost Giant will release The Harlot Star to the world on January 19, 2018. If you are a fan of Folk metal, American hardcore, Power metal , or really just great music you should mark the date on your calendar. This Album will work its way into your brain and take up residence until you have angered all your neighbors and run off your family with its music played at 11 on repeat. Seriously it’s really catchy and fun. Frost Giant hail from Philadelphia in the U.S.A. which means I have a great chance of catching them live.
The band is anchored by great guitar work from Scott Breustedt and Ty Asoudegan, pounding bass from Ian Bainbridge, thundering drums from Armen Kohroglian, and incredible vocals from front man Matti Frost. The Harlot Star is filled with great music from the opening notes to the final blast it is a journey well worth taking. The Harlot Star opens the album with a quiet track ,but it serves as an intro of sorts for Forgive Me Not, a great track that showcases the bands many talents with great vocals, catchy melodies and incredible guitars. Apostasis follows, and along with Ashes among the Earth provides a soft acoustic interlude to move the album forward. Curse of Doubt is a crushing blackened metal song that leaves you wanting more. An Exile in the Storm is a Vocal piece that always makes me sing along at full volume. It makes you feel abandoned and sad but somehow uplifted as well, (It’s probably those finger snaps and birds). Prisoner of the Past follows and it features an intro unlike anything on the album followed by a very catchy amazing song and one of the best guitar solos on the album. Ashes among the Earth transitions the album to the final four tracks beginning with The Forgotten Graves a ten minute plus epic track showcasing everything that makes Frost Giant great. Glorious time changes and instrumental passages set into an amazing tale told with stunning vocals. Of Clarity and Regret is simply stunning and one of the best pieces of music I’ve heard all year. It’s my favorite song on an album filled with amazing songs. Its six and a half minutes of awesome. Unbelievable vocals and a fantastic guitar solo filled monster of a track. Monuments to Nothing is another incredible slab of progressive metal that again makes you feel sad and happy at the same time. Frost Giant has the ability to mix and mash styles of music and somehow make everything sound fresh and incredible and there are little sonic surprises around every corner of this masterpiece of an album. If this album is any indication of the quality of music that will be released in 2018 its going to be a great year. Frost Giant is unleashing a melodic beast of an Album with The Harlot Star. Highly recommended.