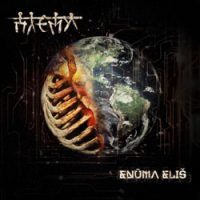 My first encounter with Plemya was back in 2016 on Youtube. I was listening to their single “Totem” and getting more and more surprised by watching the weird, masked guys headbanging in a forest. Strangely enough, it was harmonising with the music perfectly well. This quintessentially sums up how you feel throughout the whole album. Since then, “Enuma Elish” was an album I was looking forward to listening to.
With their sustained use of woodwind instruments, it reminds me of “Gyrfalcon” ; and with their music in general terms, that is, based around paganism and tribalism while offering a new approach to the genre, they certainly are on a par with “Thy Worshiper”. Rich use of percussions and woodwind instruments peak up in the first three songs of the album, as the sense of “tribalism” also shine out the most. But this doesn’t mean that the beginning of the album prevails over its ending. On the contrary, the guitar work gets much more charming as the album comes close to its end. “Novyj Rassvyet” and “Nidcnij Mir” (As I couldn’t find the English titled tracks I had to romanize them on my own, if wrong, please excuse my lacking skills in Cyrillic script.) excel in terms of guitar work. And I loved how these riffs interact with wind instruments brilliantly.
In mixing, they didn’t nail it at all. The guitars moderately suffocate under the layer of sound and as someone who attaches great importance to guitar work, it was the most obvious downside to this album from my point of view.
The album’s consistent unpredictability, its unhinged diversity makes for a 46 minutes of enjoyable piece of music. I’m doubtful that it will bore you, if you’re into this type of ethno folk metal oriented music.