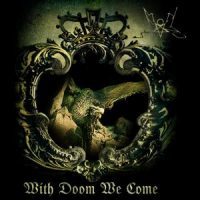 2013 was the last year we had music from Austria’s black princes of Summoning with “Old Mornings Dawn” which one of my top 5 albums from then. As 2018 approaches, we have finally a new chapter from Protector and Silenius in “With Doom We Come” scheduled for release on January 5th on Napalm. This past October they issued a single (the 11-minute epic “With Doom I Come”) as the harbinger of destruction from the new album and this appears as the last track.
There is a total of 8 tracks totaling over an hour of new music from them and in typical Summoning fashion, it doesn’t disappoint. I hate to say it is pretty formulaic but I think you will have an idea of what you will get if you have heard a Summoning album at all in your life. No major deviations from them only consistent, grim, foreboding Tolkien inspired black metal with ambient touches. I’m going to say it….they invented Tolkien black metal and while there are others who follow a similar thematic viewpoint, none quite come close to the Summoning sound. Bridging the gap between black metal and atmospheric ambient has never been so perfected….the programmed bombastic drums, the barely defined guitar, reverbed vocals, varied instrumentation….all the makings of another classic. 7 of the 8 tracks top the 7+ minute mark with the lone exception being “Barrow-Downs” which feels more like a transitional piece if anything since it is basically an instrumental. It’s still as killer as always and you can never go wrong with a Summoning album. Of course, there will be the naysayers who will want to tear them down as being a “one trick pony” or whatever but I will continue to listen as long as they continue to produce high quality music like this. I would say there may be a little more layering of instrumentation in some of the tracks like “Silvertine” as an example so a few more veils to peer thru while listening. The mix and production are on par with “Old Mornings Dawn” with the percussion being the most noticeable track with instrumentation under it with vox set in the back and yes it works….probably not for anyone else but for Summoning, it definitely does.
Maybe with a few more listens and comparing against the rest of the discography I could give you some more details but I would just say that “With Doom We Come” is just another epic chapter in the Summoning catalog… that really just sums it up.