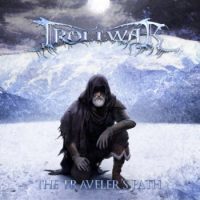 After just becoming obsessed with the latest Nordheim album, the arctic clipper came down from Quebec again delivering the frosty new EP from Trollwar. Packed with 5 epic tracks (4 plus obligatory intro) “The Traveller’s Path” is a welcome return for Trollwar and first new tunes from them since 2014’s “Earthdawn Groves” album (and yes I know the Distrollbar split release with Distoriam and Trobar came out this year but I meant a Trollwar only release).
“Omens Of Victory” was released as a single last year so actually 3 new tracks to check out and they are all stellar. I think a tag of symphonic melodic death folk metal works well for them and for me too with tons of things going on musically here. With 7 band members you would think this could sound a little messy but there is a streamlined approach to the tracks. While certainly filled with technical aspects, “The Traveller’s Path” is not overly progressive to the point of not being catchy. On the contrary, the tracks are face smashing and memorable with enough layers to satisfy even the most tech savvy of you folksters. I think there is an inkling of what I would call a “Quebec sound” in the folk metal arena now with Trollwar having elements in common with acts like Distoriam, Drunken Fury, Nordheim and Valfreya. It’s hard to necessarily give you specifics other than multiple layers of instrumentation, blast beats, keys and symphonic touches with shredding guitar and vocals. At 20 minutes this is a tight EP of frost bitten folk metal for sure. With omni present accordion and keys augmenting the main riffs throughout the tracks, the mood created in the “newer” tracks (“The Forsaken One” “Forgotten” and “Shores Of Madness”) is one of conquest and glory. I am a big fan of the overall sound of this EP too with enough attention given to everything going on while still being clear and discernable. You can pick out all the individual parts if you concentrate on them but not to the point that everything doesn’t seem to gel together……it’s all there to listen to either way and that is saying something. If I had a complaint it would be I wish there was more…..yes, I’m being a little greedy. I will take what I can get and if this is what Trollwar sends my way, then keep it coming. Let’s just hope a new album has more new tracks like these if and when it shows up. If you like any of the other releases from Quebec recently then you will definitely want to all over this one too. Another epic installment in the Trollwar catalog.