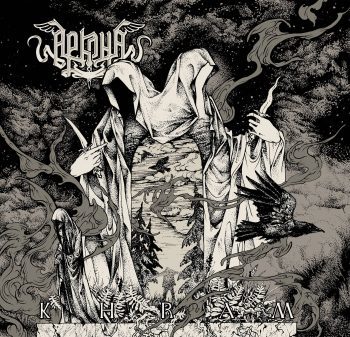 Always exciting, a new Arkona Album. Ever since Masha joined in and the band changed their name to Arkona, the band has developed with each and every album. The evolution went from lots of black and pagan metal, to music with more and more folk-elements. This trip reached the highest level, when the position on bagpipe, flutes and all kind of other authentic instruments in the band was made a permanent one.
With their previous studio album ‘Yav’ in 2014, the band focused on Black Metal more and the re-issue of ‘Vozrozhdenie’ was probably a writing on the wall of what we could expect them to become. No doubt ‘Yav’ was a very nice album on which Mash displayed her songwriting skills again. To me ‘Decade of Glory’ was Arkona’s nicest album. I’m a huge fan of the Slavic folklore in Arkona’s sound and for this, there are not a lot songs on ‘Khram’ for my taste. As you expect when looking at the coverart, this album is dark and grim again. The dark grim paganism, which dwells through this Russian temple is harsh like the first Arkona albums. The music is much more sophisticated, due to the talent Masha has refined over the years.
The Mantra’s as in and outro are very nice, it made me curious for the rest of the album, but I find it quite difficult to listen the whole 74 minutes of this album in one piece.
Tseluya zhizn’ (Kissing life) in which we hear Masha’s children once again, is quite nice, with 17 minutes it’s the longest track of this album. Long songs like this need lots of interesting changes and Arkona never disappoints in that way.
Personal favourite on this album is ‘Volchitsa’ (She-Wolf), a song which brings us 8 minutes long back a little to the Arkona I like the most.

‘Khram’ will be appreciated by the fans of raw pagan metal, but for the fans who liked albums like ‘Slovo’ and ‘Goi, Rode, Goi!’ will realize these albums were just a phase in their evolution and it will probably not come back.