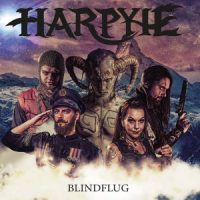 With ‘Anima’ their latest new album, Harpyie proved me wrong. I wasn’t curious about that album, but they managed to create a very nice album with that one. The band has matured, and seems to have found it’s path.
When I read the news, the band was going to re-release their first album ‘Blindflug’, I wasn’t too excited as well. This is one of the albums, which is somewhere at the bottom of my pile of albums. But, sure I had to prepare myself for the coming album, so I pulled it out, dusted it of, listen and tried to put it back in.
The band is right, when they like their new fans to buy this, long sold out, album, it should be re-produced. The productions was one of the major flaws on this debut-album.
Harpyie made a completely new item out of this album ‘Blindflug’, the coverart is brand new, that one’s obvious. What would this album sound like? Harpyie went all the way on this project, they re-arranged the songs, recorded them new. I press ‘play’ and…
Oops!… I Did It Again
I had almost written it off before I started, but I couldn’t be more wrong. This sounds actually very nice. I’ve listened to it a couple of times and I’m astonished by the improvement. This album can’t be compared with its first edition. Of course the songs, sound somewhat similar, but they could as well be covered by another band. No, the typical Harpyie sound is still there, but it has matured, like we could hear on their last new album ‘Anima’. And yes, ‘Lunas Traum’ is still the nicest track of the album, but even this one has become even better. And a song I called ‘unworthy’ on the first edition ‘Legenden’ has become a very, very nice track. The vocals have grown immensely, the overall sound is more together and no longer boring after a little while. On the contrary, you keep your full attention to this album, because it’s filled with very nice songs.
In my wildest dreams I could never imagine a band could pull such a thing off. And I have heard quite some re-issues, but never ever I’ve heard something like this.

And this is not all, Harpyie put a bonus-album in the sleeve as well. On this album, you’ll find special versions of songs as well. Songs from other albums, which are completely re-worked, an acoustic version of ‘Löwenherz’, remixes. Just as nice as the main album. Bans like Subway to Sally, Vogelfrey, Krayenziet, Equilibrium, Soulbound, Metusa, Tanzwut, Delva, Feuerschwanz/Dartagnan, Mythemia and Nachtgeschrei, contributed to this album.

This album is not only THE opportunity for the new fans to obtain the first album of Harpyie, but is a ‘must have’ for all their fans. And I think, you will listen only once to the original ‘Blindflug’ album. The new edition is so much better! I even doubt if re-issue is a right description here, I would prefer to call this a whole new album. The band should win a prize for the best re-worked album with this one!