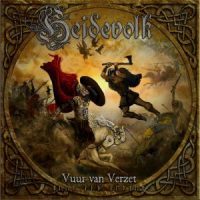 Our album of the year contenders list for 2018 is going to be extremely full this year with so many epic albums coming out. Napalm Records is vying for two slots in the top releases with the new Summoning album out on January 5th and the newest album from Dutch Pagan metallers Heidevolk on January 12th. “Vuur Van Verzet” (“Fire Of Resistance”) is their follow up to my album of the year for 2015 (“Velua”) and it sees the Heidevolk horde once again tackling the concept album. I commend them for giving it a try again after doing it before with “Batavi” and I would say “Vuur…..” is more successful as a concept album for sure and just a more enjoyable listen throughout. I’m not sure what the disconnect was for me personally with “Batavi” as it is still a great listen. “Vuur Van Verzet” doesn’t try as hard to be a concept album and seems to have a more comfortable vibe to it. Everything just seems to fall into place more here. Conceptually, the wars against the Roman empire by the northern peoples would be the simplest description of the track direction I would give you. That is simplifying it immensely as there are tracks interwoven that add to this basic structure. Take “A Wolf In My Heart” as an example……it adds to the story but is not historically based plus they have sung in English on this one as a bonus. I still prefer the Dutch vocalized tracks, but I appreciate that they can perform in either language without a drop off in quality. There is more diversity on this album than ever before with a nice cross section of styles that have a somewhat retrospective feel to their previous albums plus some new touches. “Tiwaz” and “Gungnir” both have an old school Heidevolk vibe to me while tracks like “Yngwaz Zonen” show them venturing into some Heathen Folk territory while still others employ some string arrangements. There is even a guest appearance by one of the most recognizable vocalists around in Nemtheanga from Primordial on the “The Alliance”. Lots of cool stuff for every Heidevolk fan out there, no matter what your tendencies as far as favorite style is from them. From a sonic perspective, the mix and overall production I feel are less brooding and more streamlined then ever. Vocals and instrumentation are clearly all discernable and blended perfectly throughout.
Just another epic chapter in Heidevolk history to delve into and another amazing album to start off 2018 with…….