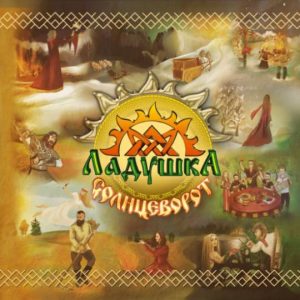 Ladushka has released their second album ‘Solntsevorot’ (Sunshine). After their solid debut ‘Solntsekarau’, released about two years ago, the band has made a few changes. They changed the guitarist and share Igor with Temnoles’ye. But more important soundwise is the change of vocalist, Maria fills in this position now. But to be honest this hasn’t influenced their music at all. The female vocals are still very accessible and not as heavy as bands like Grai, but still leaning towards metal. The folk metal is straightforward quite folky in a Slavic style, leaning heavily on the Russian Bayan. This Russian accordion produces a slightly different sound compared with it’s West-European family. Is Ladushka a band which really stand out? No, they’re not, but the music is overall pretty nice to listen to. The lack of some harsh vocals or screaming guitars here and there, doesn’t make this less interesting. But when you like some more extreme metalsounds, you won’t get your belly filled with Ladushka. The band plays folk-metal, in the pure shape of loud folk.
The production is nice, all the instrument are displayed well in the mix and the sound is very open.