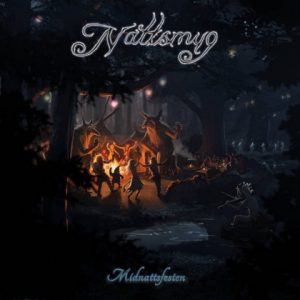 Way back when (July 2017) I hope you had a chance to check out the discography of Sweden’s Nattsmyg after a review of their latest release “Sinmara”. Nattsmyg are one of those bands that should be on everyone’s radar by now and with a 6th full length being released in “Midnattsfesten” (“Midnight Party”), once again it boggles me that you may not know them. I would put them with my friends in Goblin Hovel in the fact that they churn out tons of epic tunes but enigmatically are not super well known. Stylistically, I would not compare the two bands and I would even have a hard time comparing “Sinmara” to the new album in numerous regards. The two words that I kept coming back to were “symphonic” and “progressive” in terms of where “Midnattsfesten” feels for me. There are more keyboard driven and female vocals led tracks then “Sinmara” and I think this could have wider appeal. If you liked “Sinmara” there will still be that style of track here as well…..bordering on black metal with deathy vocals, guitar and programmed drums. While I have compared Nattsmyg to some Emperor, I think after hearing “Midnattsfesten” a few times I would say a better comparison maybe in Enslaved (less the Viking themes) in terms of the variation in heavy and progressiveness. Still not a 100% but not bad. Nattsmyg is still a one-man project per se with Dan Heikenberg at the helm on all instrumentation/male vox with Linn Carlshaf contributing a huge part of the Nattsmyg sound in the female vocal department. Their interplay in tracks like “Fear Of The Gods” and the title track for example shows off just some of what they are capable of doing together. There is some folkier tracks on here as well…..”Draugens Hämnd” is super folky and there is just a lot more diversity in overall styles here. Just some nice instrumental stuff here to like “The End” and a few others which are sparse on vocals and lyrics and show more of the musical side of Nattsmyg. I would call this on par with “Sinmara” and a different approach this time around but equally effective. Just like “Sinmara” there are remixed versions of all of the tracks (“Trinitite Remixes”) which are cool to hear but not necessarily imperative to have them on the same release. There is a nice lively sound here with some nice dimensionality to it, giving it a bit of a creepy feel. “Midnattsfesten” may not be as boggy and folky as say Bergsvriden or Svartby but is a step in that direction while still having some black metal connection. Another solid release for Nattsmyg.