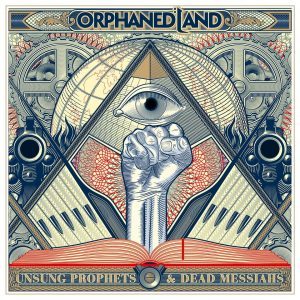 Orphaned Land has been on my radar since their beginning. They have a different sound and vibe from most folk-metal/progressive rock bands. They have been focused on creating a unique sound and also for spreading a message of peace and inclusion across the different religions and cultures of our world. On Unsung Prophets and Dead Messiahs they have created their best and most coherent album yet.
The album has a deep impressive concept. It explores the idea that mankind chooses to allow oppression rather than standing against it. Our societies are being intentionally dumbed down and the result is people are willfully stupid and allow leadership to take over and do what they want. Why do we know more about pop culture and not what is happening in our countries daily?
The sound of the album is very diverse. It is progressive and at the same time folky as well. Each song has its own vibe and there are many standout tracks.” The Cave” opens the album with a long complex track that flows smoothly through its eight minutes. Great vocals and instruments. This track sets up the concept of the album and gives the listener an idea of what’s to come. “We do not resist”, comes straight at the listener with aggressive vocals and aggressive guitars. Strings and choral vocals enhance “In Propaganda” . The track has the very oriental metal sound that Orphaned Land is known for. It flows directly into “All Knowing Eye” a beautiful song with amazing guitar solos.”Yedidi” is an adaptation of a traditional song and blends metal and oriental melody with beautiful exotic vocals. “Chains Fall to Gravity” follows and provides a wonderful midpoint to the album. The track runs nine plus minutes but it is over to soon. The song also features a guest performance by Steve Hackett. The incredible “Like Orpheus” opens the second half of the album with a wonderful guest vocal from Hansi Kursch. The mostly instrumental and beautiful “Poets of Prophetic Messianism” provides an oasis of calm before the amazing one two punch of “Left Behind” and” My Brothers Keeper”, both songs burn with passion and melody. “My Brothers Keeper “has one of the best vocal performances of the album and its most intricate. The riffing in “Take My Hand” is pure gold along with incredible harmonies and a wonderful message. The quiet opening of “Only the Dead Have Seen the End of War “barely prepares you for the brutal song that follows. Tomas Lindberg provides a wonderful guest vocal on the most metal song on the album. “the Manifest-Epilogue” closes the album with another wonderful guitar solo and a warning for the world ..Don’t let it happen.
Unsung Prophets & Dead Messiahs is an incredible album full of outstanding vocal performances, deep meaningful lyrics, wonderful instrumental performances across the board and a cohesive listening experience from start to finish. I’ve been listening to a lot of bands with a message lately and enjoying it immensely . Our world needs more reminders to keep power in check and to pay attention to what is going on around us. Orphaned Land is one of those bands that should not be missed. This may be one of the best albums released this year only time will tell but I will be returning to it for a long time to come.