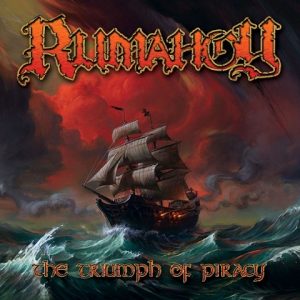 Hailing from Ocracoke Island, North Carolina Rumahoy have a good pirate heritage to build on. Ocracoke Island was a favorite haven of Blackbeard and pirate lore is strong in the area. The band’s sound is similar to other pirate bands like Alestorm and Dread crew of Oddwood. They have their tongues firmly in cheek for tracks like “Forest party”,” Huffman the Pirate King”, and ” Netflix and Yarr”. The music is a mix of traditional shanties and metal and is generally well done. Lead singer Captain Yarrface has a suitably gravelly voice and personality to bring these tales to life. Leadoff track” AHOY” establishes the sound of the album with gang vocals and a melodic feel from the beginning and the band does not veer very far from it for the entire album. Only the short “Kill the Trolls” and the epic” Triumph of Piracy” break the mold and stand out from the pack. “Quest for Heritage” features some great metal licks and a fun battle vibe. “The Haitian Slam” has a party feel and makes you want to dance to the Caribbean rhythm.” Pirateship” is sung mostly in German but the song is weird and has an almost cabaret feel. The album is pretty well done and if you like the pirate metal seen it is enjoyable. “Triumph of Piracy” shows what the band is capable of and the guitar work in the last half is impressive. More songs like this one would make for a better experience.
I got some laughs out of the album but I think they have better things in them.