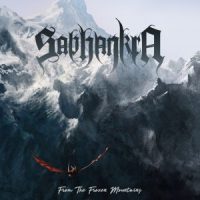 From Turkey veteran quartet Sabhankra release their fourth full album. We don’t have to tell these guys how to play their instruments or write an interesting song. The band has found its place, going for melodic death with just enough folk influences to grab our attention.
From the beginning Sabhankra has chosen English as the language to express their music. The lyrics have always had an epic theme and are rather understandable. No clean singing, but blackened growls. A well known danger is that the singing is too monotonous. And, to be frank, sometimes it is. Therefore it’s a good thing that the melodies determine the feel of the songs. And these melodies are perfectly well thought out. The guitars are what makes the band worthwhile. A fair comparison would be Suidakra in my opinion. Strong melodies and clear guitar lines.
The album contains six songs from four and a half to more than eight minutes in length. One of the longer songs being ‘The last to stand’. By far the weakest song. Maybe the band aims for a trancelike mood, but the result is an overly long and boring song. Fortunately, this is the exception. All the other songs are definitely worth a spin. Listen to the first song Crushed Under the Fists of the New Reign. The shortest song on the album. On this song the defining elements of Sabhankra com together. Speed, guitar lines, and a few unexpected sounds and rhythm twists. The same goes for second song ‘They are everywhere’. Here the repeated riffs work much better. In fact, they might stick on your head for coming weeks.
The crisp sound adds to the enjoyability of listening to the album in its entirety. Nothing world shattering, just designed, produced and performed at a perfectly acceptable level.