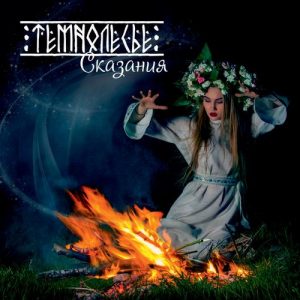 Темнолесье ‘Сказания’Yes that is Russian you see there and it is roughly pronounced in English as Temnoleyse with their debut album entitled “Legends”. So obviously I gave away that Temnoleyse is a Russian band already and they hail from Kaluga (SW of Moscow) not from Saint Petersburg where it seems a lot of Russian folk metal acts come from. They have been in existence since 2013 and this release has 10 tracks totaling just over 42 minutes. First off, I’m not sure if I could put this into any sort of easy to define category. I guess black metal primarily with touches of folk metal is as close as it gets but with more strange twists and turns. Trying to give you some sound alike bands was a challenge….maybe some Thy Worshiper and Paganland with Negura Bunget? Not sure if this is 100% accurate but let’s go with it for now. For the most part, keys in numerous forms as piano, organ or other instruments and female vocals in most tracks are what would put you into folk metal waters. The primary vocals are of both the black metal growl and more screechy style which gives more dimension to the tracks and with the lyrics being in Russian, there is even more mystery to them. I translated some of the lyrics thanks to Google and the subject matter was myths, history and folklore. For a debut, this is probably better than most with Temnoleyse (by the way it translates as “Darkwoods”) taking the time to craft their unique style and the songs before unleashing them onto the unsuspecting masses. I would say that there are a few tracks that are very similar sounding to each other whether it is the main riff, the keys or the tempo so maybe trying a different thing or two next time would make for a more powerful release.
All in all, “Legends” is a solid first effort with a decent mix and overall vibe and another fine export of folk metal from Russia.