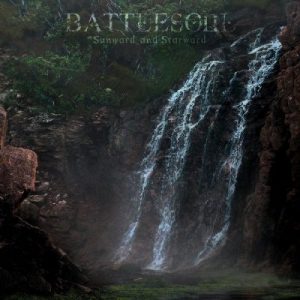 Ontario Canada’s Battlesoul have been almost criminally overlooked for the last 10 plus years but they have kept a relatively low profile, so I understand on some level. 2013’s sophomore album from them “Tir Na Nog” has been a heavy spinner for me for some 5 years and now their new album “Sunward and Starward” coming at the end of the month will take over. I don’t think they fall into a perfect genre as they may not be as folky as you might think and may not be as black metal either. They blend folk, black, power, celtic, thrash and classic metal into every track and this new album may have found the focus and style that may get you all on board. They still have the tendency to be in numerous directions stylistically but cohesively so….and you will know what I mean after a listen or two. Imagine a combination of Saor, Amiensus, classic Priest, Sojourner and Cruachan and it may give you some idea of what Battlesoul is throwing down. Mind blowing right? Yeah, I think so too. ”Sunward….” has a little bit to offer everyone who listens. They have gone lean and mean with this one….less tracks (10) than “Tir Na Nog” (15) and shorter overall (52 minutes) so there is no time for screwing around as they start the fray. Opening track “All I Understand” is a face smasher and it’s refreshing that there is no intro on an album since I can’t remember when. The texture to the guitar sound is nice, thick and inviting and the riffs come at you like a relentless hailstorm one after the other. They certainly do not stray away from letting the guitar solos fly either. The use of arpeggios plus the different tempos and styles throughout make this an interesting and intense listen time after time. Vocally, Jon Doyle has hit new levels showing even more range….from the deathy growls and black metal screeching to Halford-esque high notes. The backing vocals and female vocals are another huge highlight that hit me every listen……very harmonic and filling. There is some folk instrumentation here and there (I would say it is flute) but mostly this is straightforward metal in various forms. Tracks range from 3 to almost 8 minutes with the title track but even with knowing the track lengths in advance, most of the tracks pack so much in that they seem timeless. I love the mid pace of tracks like “Arrival” where the mood sweeps over you like the fog rolling in…..again a little bit of everything for every listener.
I love the overall mix and production with a little bit of a haze to it but not enough to smother the experience and still let the music and vocals shine. This is a great “return” of sorts for Battlesoul and even though there are some changes overall, I think they are all for the better. A great album that I will be spinning numerous times until the next one……