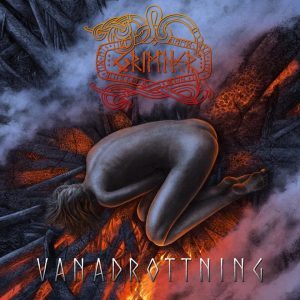 Sweden’s Grimner has had quite a successful run as of late…..top EP in 2015 for me with their acoustic “De Kom Från Nor” and our top album “Frost Mot Eld” in 2016 here at folk-metal.nl. So now 2018 ushers in a new album entitled “Vanadrottning” on Despotz and the question to be answered…..will they still have the success they have had up to this point? There was a concern with news that guitarist/vocalist Marcus had announced his departure back in November and how it would affect their sound if at all. New member Martin Welcel had some pretty big shoes to fill and I can say he has seamlessly blended in without missing a beat. So rest easy Grimner fans all is well and I would say that “Vanadrottning is as good if not better than “Frost Mot Eld”……and I reviewed “Frost” and it was a 10 so another 10 without question. “Vanadrottning” (“Queen Of The Vanir”) is 11 tracks and 54 minutes long and is filled to the rim with classic Grimner. They have also strayed into some new territories too so even more new and exciting Grimner paths to walk down. All tracks are still in Swedish as they should be as I think this works better for them in the overall feel of the tracks. It would be hard to describe specific additions in the Grimner arsenal but there are some interlude parts that have a different feel to them and I would say that they are a bit “riffier” on this album more than ever. While I tend to hum the vocal melody or the wind instrument parts, I was more remembering the rhythm and riffs more so than ever. What I appreciate is that they are not trying to be something they are not…..like writing a 20 minute song for an example. Tracks range in the 3 to 6 minute range and they understand that is more than enough time to get everything accomplished. The flute/pipes parts are there as always and probably the most identifiable part of their sound thanks to Johan but I would say that everyone gets a chance to shine on this album. Of course, David and Henry lay it on punchy and synchronized as ever with Kristoffer veiling us with keyboard magic at every turn. The synergy that Ted and Martin have in such a short amount of time is readily apparent. Highlights? Possibly the heaviest track in their catalog in “Dodens Dans”….well the whole album obviously is a highlight for me but the special appearance by Erik from Månegarm on 2nd single “Fafnersbane” would be the easy one to pick……one of the folk metal giants joining them on an album. Happen to remember them on Vadstena Gille playing Månegarm tracks acoustically just a few years ago? Well I do and I got to thinking how the circle has been completed…..pretty epic. There are too many highlights to list. Production wise there is enough grit but possibly a little more restrained than “Frost….” but heavy enough to still be more metal than not. Another album of the year for Grimner? A lot of competition no doubt this year but we have a long way to go and this one isn’t going away any time soon for me.
They make it look so easy time and time again….congrats Grimner on another epic journey for us to go on…..